Institution saved to your shortlist.
Advertisement

The SYC was set up by the Police and Crime Commissioner (PCC), Katy Bourne in 2014 to give young people across the county an opportunity to have a voice on policing and crime.

The students collected the national Engagement Award – backed by the Cabinet Office and Ministry for Civil Society – from Compact Voice, which represents the voluntary sector and promotes effective partnerships between the sector and government.

The University of Brighton third-year criminology students, Conor Simmonds and Sefton Dosi, joined the commission during 2014 and won the award for their work on November 4, 2015.

Conor said: “This award illustrates the foresight and success of the initiative of the PCC in the setting up of the SYC in 2014. It encourages the belief that the youth of the country can be an important factor in the solution to crime rather than the problem. 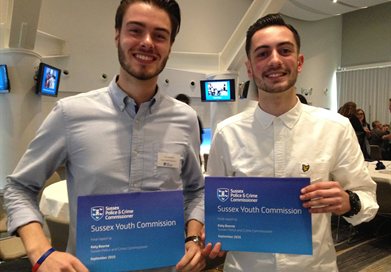